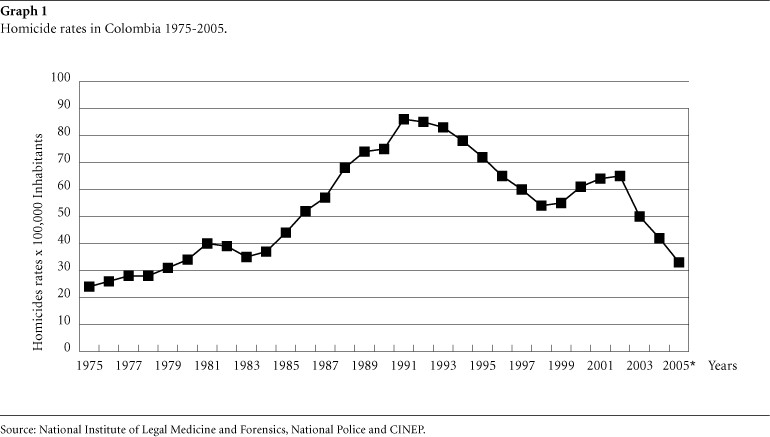 HOW DID COLOMBIA MANAGE TO SOLVE THE INTERNAL SOVEREIGNTY PROBLEM OF GUERRILLA GROUPS?

Colombia has always been well known for its drug-related issues, especially during the mid-1970s, where Colombia’s rural poverty reached 67 percent of the population and the gap between the economic classes was so large that it was almost unmanageable to prosper, leading many of the individuals that formed part of the working class to migrate to rural areas in the south of Colombia to grow plantations of coca.

This then lead to the increase of illegal drug trafficking and the rise of multiple drug cartels such as the notorious Medellin cartel which had an extremely negative impact on Colombia’s internal power sovereignty due to the involvement of Pablo Escobar in Congress, resulting in multiple homicides such as the murder of Rodrigo Lara Bonilla which was the Minister of Justice in 1984.

Escobar infiltrated the consciences of the military, police, politicians, prosecutors, journalists, and several businessmen, consequently pushing Colombia into a wave of chaos and violence. Therefore, this raises the following question; to what extent did drug trafficking, Pablo Escobar, the Medellin and Cali cartels, and other drug-related issues challenge Colombia’s internal sovereignty?

To answer such a complex question, first, it must be unpacked into different sections. Firstly, we must see what is internal sovereignty to see what exactly is being challenged by the drug trafficking in Colombia. Internal power sovereignty refers to the ability the state has to fulfill its purposes, such as the dictation of its own law, the creation of order and social peace, and the extent to which the state is unified and politically organized; to have effective control within its borders.

Now, with the rise of the drug cartels, the creation of order and social peace was undoubtedly defied, due to the increase in homicides and other manifestations of violence which destabilised the country.

The following graph acquired from illustrates the rise in homicides from the mid-70s to 2005, which has a clear relation with the escalation of drug trafficking which occurred during that same period.

This increase of violence caused much insecurity within that territory, which then put in question the ability the government had to guarantee the safety of its citizens and maintain order. In addition, this led to widespread fear that surrounded anyone who thought of opposing to the Narcos’ will, specifically Escobar’s, who had shown after murdering the minister of Justice in 1984 that there were no limits to his reach.

This was followed by other prominent drug traffickers that become so influential that they could even get themselves nominated to local or state offices. Subsequently, a long period of political and civil corruption followed, which roots were deep down in its own government, and led to the intervention of the US, which subsequently was the main importer of Colombian cocaine, as it could not stop it from getting through its borders.

In addition, Colombia was going through other internal struggles of its own, such as the conflict between the liberals and the conservatives which followed through since the creation of the constitution in 1886 which gave birth to the Republic of Colombia. This fight between liberals and conservatives generated the “guerrillas”, which is where the battles between armed groups formed by conservatives or liberalists.

The “guerrillas” were additionally fuelled by the drug trafficking cartels since unlike the state army which does have founding from the taxes collected from its citizens, the guerrilla groups that continuously commit illegal activities in Colombian territory do not acquire any sort of legal founding, thus have to recur to multiple kidnappings, and ultimately to drug trafficking to finance their illegal crimes.

This mainly took place after the downfall of the Medellin and Cali cartel, since afterward the drug market fell in the hands of groups such as FARC, which then shifted their principles to revolve more around a drug dominated ideology, which fuelled their additional communist ideals

The decision of the guerrilla groups made to get involved in the production of cocaine did not only help finance their operations but also it was a political strategy in order to earn much political support. Although at first groups such as FARC were opposed to cocaine production since they considered it as “the fruits of capitalist degeneration”, they later concluded that their involvement with the drug market would target much of the underprivileged crop farmers which had collaborated with previous drug cartels.

This led to a huge increase in their popular support, but it also allowed the government to prosecute the guerrilla groups with further purpose, and label such groups as “narco-guerrillas” which allowed the intervention of the US in the conflict with narco-trafficking by providing financial aid.

In accordance with all of the above, it is clear that drug trafficking has generated immense problems for the country, which have been maintained over time, effects derived from drug trafficking that have affected both economically, socially, and politically Colombia, generating institutional instability and an environment that promotes a reduction of the legitimacy of the leaders, hence it is an enormous challenge towards the government’s efforts to maintain internal sovereignty. Additionally, it fuels and serves as income for the guerrilla problems that happen within the country.